The historic centre of Pienza 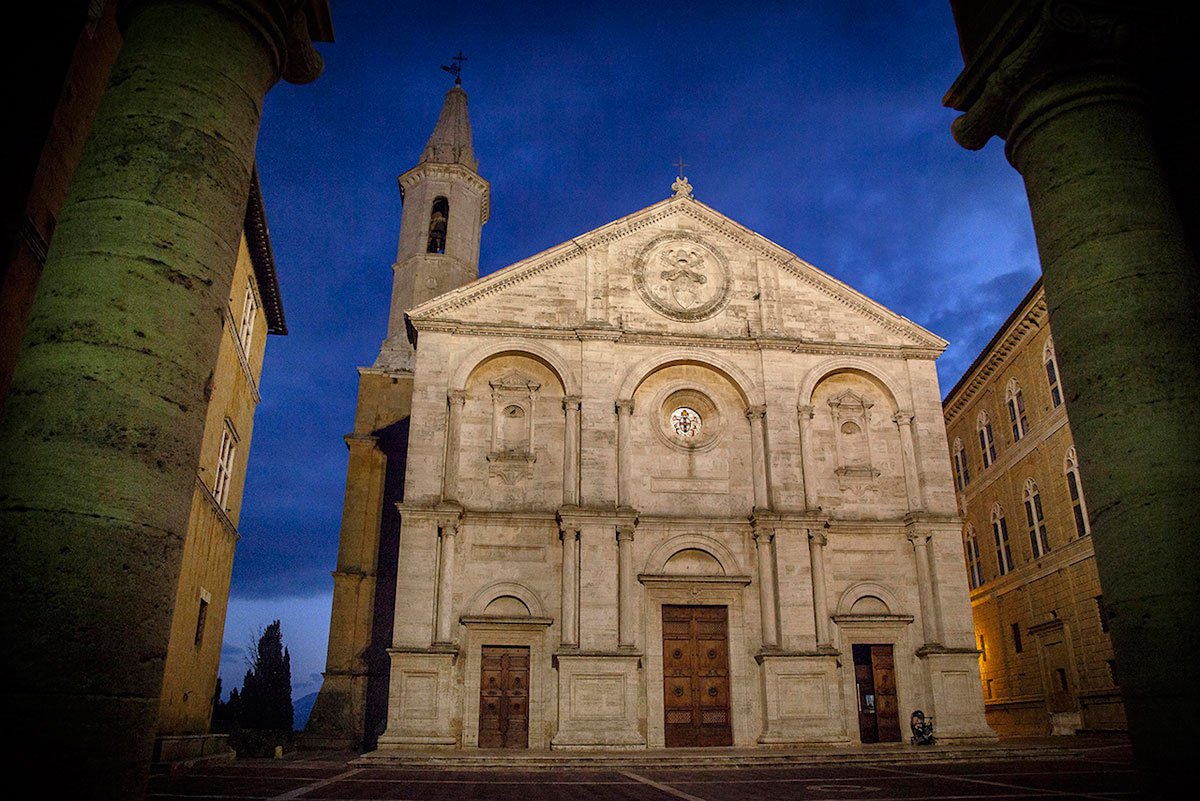 Pienza, located on a hilltop overlooking the Val d’Orcia, 53 km south-east of Siena, was founded in the Middle Ages with the name of Corsignano. The city was later renamed and redesigned in the late 15th century by Pope Pius II. Enea Silvio Piccolomini was born in this Tuscan city. He was an important humanist, before being elected Pope in 1458.
It was in this little town in Tuscany that Renaissance town planning concepts were put into practice for the first time, following Pius II's decision to entrust Bernardo Rossellino with the job of transforming the appearance of his native village. Rossellino applied the principles of his master, Leon Battista Alberti, humanist architect and philosopher, author of the first treatise on Renaissance architecture. The Pope was also inspired by German philosopher, Cardinal Niccolò Cusano and by the Germanic Gothic tradition. This is evident inside Pienza Cathedral, with the typical late Gothic style of the churches in southern Germany, while the exterior is in pure Renaissance forms. The bell tower mixes Gothic and Renaissance forms.
The new vision of urban space materialized in the splendid trapezoidal square, known as Piazza Pio II. Important new buildings started to be constructed around the square in 1459 and included the cathedral, Palazzo Piccolomini, Palazzo Borgia (or Palazzo Episcopale), the Presbitery, the Town Hall and Palazzo Ammannati. Although it retained most of its medieval urban plan, a new road axis, Corso Rossellino, was built to connect the two main portals in the medieval walls, which were also rebuilt in the same period. Pius II's plan to develop the city as his summer residence involved the construction or renovation of about 40 public and private buildings and helped to transform the medieval village into an example of Italian Renaissance. Among these, there are the new buildings for the cardinals accompanying the Pope, as well as 12 new houses for the people, built near the walls and the Porta al Giglio.
This was first time the Renaissance humanistic concept of urban design was applied to a city, making it crucial in the evolution of the concept of the "ideal town" designed, and it played a significant role in later urban development in Italy and abroad.
The perimeter of the site, which coincides with its original walls, includes all the elements that contribute to demonstrating its Exceptional Universal Value. The complex created by Pius II has retained its structural and aesthetic integrity, as all of its elements have remained substantially intact.

Criterion I - Representing a masterpiece of man's creative genius.

Criterion II - Showing an important exchange of human values, over a long period of time or within a cultural area of the world, concerning developments in architecture, technology, monumental arts, urban planning and landscape design.

Showing an important exchange of human values, over a long period of time or within a cultural area of the world, concerning developments in architecture, technology, monumental arts, urban planning and landscape design.

Criterion IV - Constituting an extraordinary example of a building category, of an architectural or technological ensemble, or of a landscape, that illustrates one or more important phases in human history.

Constituting an extraordinary example of a building category, of an architectural or technological ensemble, or of a landscape, that illustrates one or more important phases in human history.

See all posts on Pienza