The historic centre of Siena 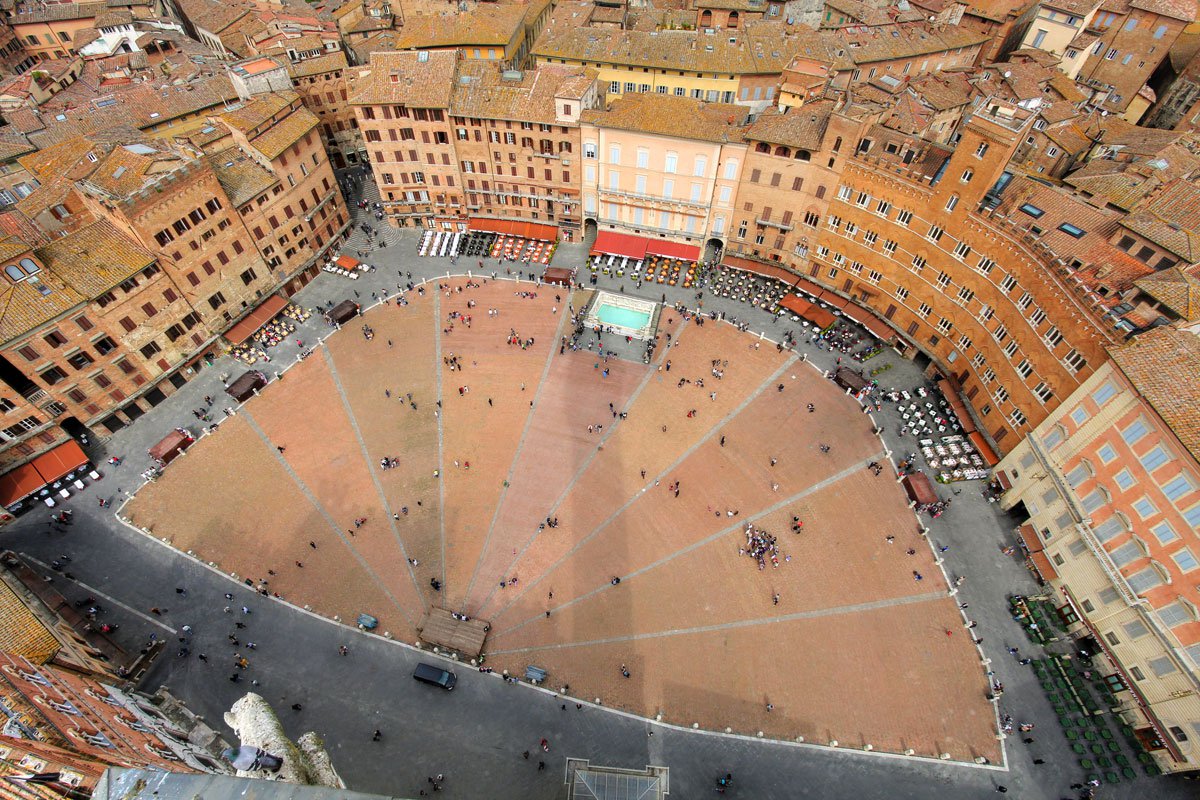 The historic centre of Siena is one of the archetypes of a medieval town. Historically, the inhabitants cultivated their traditional rivalry with the neighbouring cities of Florence and Pisa, also in the field of urban planning. Over the centuries, the city has retained its Gothic appearance, which it acquired between the 12th and 15th centuries. In that period, Duccio, the Lorenzetti brothers and Simone Martini marked out the paths of Italian and, more generally, European art. The entire city of Siena was designed like a work of art, perfectly integrated into the surrounding landscape.

The Tuscan city extends over three hills, connected by three main roads in a Y shape, that intersect in a valley that later became Piazza del Campo. The fortified walls, which are seven kilometres long, still surround a 170-hectare site. Double defensive portals open at strategic points, such as the Porta Camollia on the road to Florence. To the west, the walls include the fort of Santa Barbara, rebuilt by the Medici family in 1560 and completed in 1580. Towers, palaces, churches and other religious buildings still exist within the walls. The fountains, still sourced by a vast network of original canals called "bottini", are also worthy of note.

Siena's distinctive Gothic style is represented by the symbolic Sienese arch, imported into the city from the East as a result of the crusades. The arch remained dominant in architectural styles that followed, including the Renaissance ones. Even when the buildings were heavily renovated in the 17th, 18th and 19th centuries (respectively in the Town Hall, Palazzo Chigi-Saracini and Palazzo Marsili), the Gothic elements continued to be the favourites.

Siena is an exceptional medieval city that has maintained its character in an extraordinary qualitative context. Its influence on art, architecture and urban planning in the Middle Ages was very important both in Italy and in Europe. The city is a masterpiece of dedication and inventiveness in which the buildings were designed to adapt to the entire design of the urban structure and also to form a whole with the surrounding cultural landscape.

Criterion I - Representing a masterpiece of man's creative genius.

Thanks to its urban and architectural characteristics, the historic centre of Siena is evidence of man's creative genius, and concretely expresses the human capacity for art and aesthetics.

Criterion II - Showing an important exchange of human values, over a long period of time or within a cultural area of the world, concerning developments in architecture, technology, monumental arts, urban planning and landscape design.

The original example of figurative civilisation, in architecture, painting, sculpture and urban planning, led to an important cultural influence not only in the territory of the Republic of Siena, but also in Italy and Europe, particularly between the 13th and 17th centuries.

Criterion IV - Constituting an extraordinary example of a building category, of an architectural or technological ensemble, or of a landscape, that illustrates one or more important phases in human history.

The structure of the city and its development, uninterrupted for centuries and driven by design unity that has been preserved, has made Siena one of the excellent examples of an Italian medieval and Renaissance city.

See all posts on Siena